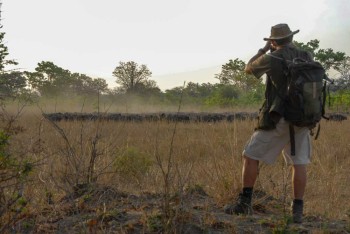 Chizarira is situated in the Northwest of Zimbabwe on the edge of the Zambezi Escarpment. The landscape is characterised by hills and steep, jagged gorges that rivers like the Mucheni have dug into the rocky ground for themselves over millions of years. Two of the park's camping sites are situated on the edge of the Mucheni Gorge and offer incomparable views.

Because of the variations in altitude, the vegetation is made up of a multitude of species. On the edges of the gorges and up on the hills, Brachystegia species dominate, whilst at lower altitudes Mopane forests and and Baobabs grow. In the course of a morning's bushwalk, it is normal to pass through several different zones of vegetation.

Accordingly, the park is enormously rich in birdspecies. Very lucky birdwatchers could even have a chance to spot the Angola pitta, or Taita falcons that nest in the flanks of the gorges. Elephants, buffalo, lions and leopards can be seen in Chizarira, the rhinos were relocated when the pressure of poaching became too great. Many different antelope species occur in the park, including the tiny klipspringers that can climb up sheer rock faces.

The infrastructure of this park is not very well developed and there has not been much maintenance done on the roads, thus it is best to move around on foot as much as possible. For a few US$ per hour you can request a National Parks scout to accompany you, walking alone is not permitted.