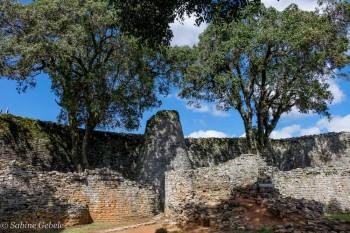 Three complexes can be distinguished. The “Hill Complex”, so called because it is elevated above the plain on a huge granite hill, was probably used as a temple and as the residence of the king and his closest family. Also it was allegedly used for judging court cases and to negotiate conciliation between parties. Below this complex are the “Valley Complex” and the “Great Enclosure” in which the wives of the king resided, along with his counsellors and other chosen people.

At the high point of Great Zimbabwe’s existence, it is said that more than 10.000 people lived here. It must be noted that people lived in mud and thatch huts in and around the massive stone walls. They raised cattle, mined for gold and other ore, and they traded, as is proven by artefacts of Asian and Arab origin that were discovered within the site.