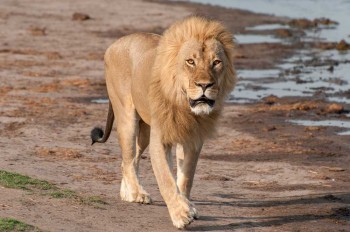 Hwange National Park covers an area of 14,000 km², making it the largest protected area in Zimbabwe. There are no rivers that carry water all year round, thus in the dry season from about May to November the animals depend on the water points at which water is artificially pumped for them.

Due to its huge size, the park offers diverse habitats for animals and birds. Hence, over 100 species of mammals and 400 species of birds can be found here. Only a very small part of the park is developed for tourism.

Join us on the trail of elephants and lions, track them on foot and in open vehicles, allow yourself to be fascinated by the many graceful antelopes, sit peacefully and watch the huge variety of birds in all their amazing shapes and colours.

In Hwange it can be very hot and also cold and frosty, depending on the season. All the seasons have their own special atmosphere and beauty here, just as they do elsewhere in Africa.

During colonial times, the British pronounced the name "Wankie" but it derives from a local chief named Hwange. Ndebele - King Mzilikazi, proclaimed this area as his hunting territory.

After settlers took over the land, they attempted to farm and breed cattle. Both enterprises failed due to lack of water and nagana disease that was spread by tsetse flies. Lions that hunted the cattle also made life difficult for the settlers. Even today some of the areas that were cleared for farming are still visible when you know where to look.

Large parts of the present park were turned into a Wildlife Reserve in 1928. In 1949, the former cattle ranch belonging to H.G. Robins was purchased, added to the Reserve and the entire area was declared a National Park. H.G. Robins had tried to breed cattle, but lions and leopards took many of his animals, thus he gave up and turned his ranch into a game farm.

At the time of its proclamation as National Park there were barely any animals left in Hwange. They had been hunted relentlessly and they only migrated into this arid park in the rainy season. Due to the creation of approximately 60 artificial water points, a large number of wild animals is now held within the park throughout the year.

Today Hwange National Park is the most popular tourist attraction in the country next to the Victoria Falls and Great Zimbabwe Monument. There are several reasons for this:

Accessibility: No one who visits Zimbabwe wants to miss seeing the Victoria Falls. Hwange National Park is not even a whole day's journey away from the Falls, and a visit to both places can be combined easily.

Landscape and animals: The park can be divided roughly into two regions. The north has more water, the altitude is higher and there are numerous rocky outcrops. In the south, the landscape merges into the sparser and more arid Kalahari sand. In the area around Main Camp and south-east of it, the soil consists of Kalahari sand. Therefore, the landscape is flat, sometimes slightly undulating, there is a lot of open grassland with groves of camel-thorn and teak trees. In the dry season there is little natural water in the park, the animals are thus dependent on artificial waterholes. Most likely you will see, elephants, many species of antelope, giraffe, buffalo and if you're very lucky, one of the very few white rhinos in this area. Near Main Camp we have been lucky enough to see wild dogs every now and then, so it is worth keeping your eyes peeled for these rare predators. You could also find very special small animals in this part of the park that are normally associated with the Kalahari: the tiny and very pretty bat-eared foxes.

In the west and north of the park, lies the Sinamatella area. The soil and landscape are very different. Hills and rocky outcrops are the most prominent features, the vegetation consists mainly of Mopane forest. Where more underground water is available, you will also see ebony and Kigelia trees -the latter are better known as sausage trees. Again, elephants dominate the scene at the water holes but there is much more to discover. If you are very lucky you might see one of the critically endangered black rhino, but that would be akin to winning the lottery. Much smaller but no less interesting are the tiny Klipspringer antelope that move about on the rocks so easily as if they were on level ground.

Because of the different vegetation types and because of its size Hwange National Park is the reserve with the highest biodiversity in Zimbabwe. 107 animal species and over 400 species of birds can be found here. The species most desired by photographers, the "Big 5"-i.e. elephant, rhino, buffalo, lion and leopard are also found in Hwange National Park.

Observation platforms: Overlooking some of the water holes in the park you will find observation platforms that allow you to watch the comings and goings of animals and birds in reasonable comfort. In the dry season, by noon at the latest you can observe brisk traffic to and from the water and by the afternoon and evening especially the elephant herds crowd around the places where the fresh water flows directly from the pump. They drink this clean water quickly, as a stronger animal might arrive at any moment and push them away from the coveted spot. The mud at the edge of the water holes is then used to bathe extensively by elephants, buffalo and warthogs in particular. The platforms are designed so that the animals are not disturbed by visitors. On a hot October afternoon, there is nothing more relaxing than to sit with a good book, binoculars, camera and a thermos of tea in one of the thatched platforms enjoying every cooling breath of air and observing nature.

Game Drives in 4x4 vehicles: A four by four allows visitors to travel long distances within the park whilst still having the option of photographing animals and birds from the vehicle. In particular this is a good option for photographers to get close to the animals as they are far more skittish when approached on foot than by car. Of course a vehicle also makes it a lot easier to carry heavy equipment. It goes without saying that you will make the most of your safari if you explore the park with a guide. The guides have far more experience in spotting anything that moves, particularly the smaller animals and birds as well as all those fascinating creepy crawlies. They also know far better than the inexperienced visitor how closely they can approach animals without disturbing them.

Walking Safaris: Of course, this is the most intense way to experience the park. In single file, you follow your guide and stop wherever there is something interesting to see. Animal tracks, beetles, plants, everything is fascinating when an experienced guide opens your eyes to something that you almost walked past without realising it. This is the only way you can enjoy the bush in its purest form, without engine noises or the smell of fuel. You pay attention to every sound, every rustle in the bush, the warning cry of a bird, the ranting of a tree squirrel. Any movement could be an animal or just a little breath of a breeze. It is of course even more exciting to follow fresh tracks, knowing that the animal you are looking for is very close!

Bumbusi National Monument: Built in the same style as Great Zimbabwe and distributed over a vast area, these sandstone walls date back to the 18th and 19 centuries. Due to its location deep in the bush of Hwange National Park in the northern Sinamatella area, this archaeological site has not yet been researched intensively. In 2008 the floors of 18 dwellings were carefully exposed, some of them had little cavities built into them for the well-known African game of Mancala, in Zimbabwe it is named Tsoro. Very close to these walls, petroglyphs originating from the Bushmen are engraved into the sandstone. In spite of the arduous journey necessary to get there, a visit to Bumbusi is very much worthwhile, even if you are not interested in the archaeological sites. The surrounding scenery is amongst the most beautiful in the park.