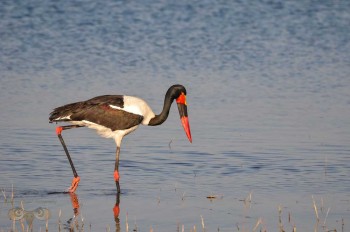 When the dam was completed, many people of the Tonga nation were relocated to higher ground, far from their villages on the Zambezi River. Where they had previously lived mainly from fishing, they now had to learn to survive by growing crops.

They tell the story of Nyaminyami, the river god of the Zambezi. His wife lives on the Zambian shore and the two were separated by the construction of the dam. The floods that devastated parts of the dam whilst it was under construction in 1957 and 1958 and that swept many people to their deaths are attributed to his anger over the building project. Even today, the earth trembles here occasionally. It is said that this is due to the efforts of Nyaminyami to finally be reunited withhis wife.

When the lake began to fill up, many animals were stranded on higher areas that turned into islands initially and then slowly but surely also began to disappear under water. In a gigantic and unprecedented effort, National Parks staff and volunteers, led by Rupert Fothergill, rescued more than 6,000 animals within 5 years, including everything from elephants to snakes and lizards.

The lake was intended as a reservoir and hydroelectric project that benefits both Zimbabwe and Zambia. In addition, a tiny species of fish named Kapenta was relocated here from Lake Tanganyika. Many commercial fishing companies live off these fish on both sides of the border.

A large part of the southern shore as well as some of the islands are nature reserves, thus a large variety of animals and birds can be observed. Crocodiles go hunting and fishing. Hippos rise out of the water to graze in the cover of darkness. Elephant splash in the lake and take mud baths, fish eagles circle over the water, their wild and beautiful call echoes far and wide.

Read more in our blog:
Lake Kariba and Matusadona National Park in Zimbabwe