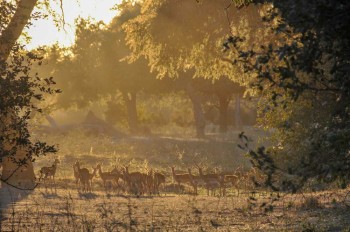 Close to the riverbank large numbers of mahogany trees and acacias provide shade and nourishment. They all look as if their lower branches have been trimmed at the same height, low for the mahoganies and high for the acacias. This is because the elephants love the acacia leaves and fruit and they browse them as far up as they can reach.  But they don't touch the mahoganies and thus these are browsed by the bushbuck and kudu. Gigantic Baobab trees, -some are thousands of years old- tower over the rest of the vegetation here and there. Mana Pools National Park is a UNESCO World Heritage site.

Further away from the river, there are huge swathes of almost impenetrable thicket known as "Jesse" and beyond that the many kilometres of mopane woodlands reaching to the edges of the valley. The mopane woodland is predominantly the territory of the tsetse flies that bite as sorely as any horsefly! In this area lie the seep-springs named Chitake Springs. The two camping sites that lie on the banks of this small stream are very frequently fully booked. In this remote wilderness, herds of buffalo and elephants roam, lion roars reverberate through the night and hyaena clans noisily divide the territories amongst themselves. A favourite spot to watch the sunset is a hill with several remarkable baobabs. This spot offers a wonderful view across to the hills of the escarpment.

In the dry season, the animals depend on the water of the Zambezi, then huge herds of buffalo kick up clouds of billowing dust on their way to drink, large numbers of antelope nibble on the remaining grass and the first fresh leaves. Elephants occasionally stroll across the camping sites and carnivores are often seen following their prey. After the rains set in, usually around mid- to end of November, the park may become difficult to access and move around in, due to the roads becoming soaked and muddy. The animals disperse and no longer stay so close to the river. On the other hand, the vegetation is fresh and green and the spectacular landscape becomes a feast for the eyes.