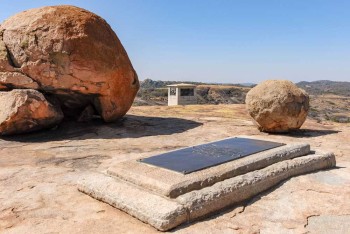 The scenery of Matopos is incredible, consisting of hundreds of small hills; some are “balancing rock” kopjes (hills) others are giant whaleback “dwalas”: huge domed expanses of bare granite. Looking at the jumbles of piled rocks on these kopjes with imagination, as in the clouds, one can see forms. Some are unique to one’s own imagination, others are easily recognisable, e.g. the “camel” and the “mother and child”.

Within the caves and crevasses formed by the jumble of rocks are the “canvasses “of San rock art. Matobo has about 3000 registered sites of San rock paintings, some of them are several thousand years old. It is a haunting experience to sit and look at the images and imagine what was going on in the minds of the artists as they painted. Some of the images are beautifully and precisely executed, depict animals, people, hunting scenes. Others look like hurried scrawls, again others are figures that seem to have no concrete shape or form. Many of the animals depicted in the paintings still abound in the area.

Sable antelope and giraffe wander between the hills and baboons and dassies (rock hyrax) scamper over the boulders. Above Verreaux’s eagles circle, the dassies forming their predominant prey. Brightly coloured lizards bask in the sunshine on the rocks or race for cover when frightened. The rock faces themselves are not a dull grey. They are painted with bright blotches and streaks of red yellow and orange lichen. Amongst the rocks you can find spectacular vegetation, none more so that the tenacious Rock figs that seem to melt into the rock itself: incredibly long whitish roots stretch over bare rock and disappear into the tiniest cracks and thick green leaves sprout in their canopies.

On the imposing “World’s View” dwala is the grave of Cecil John Rhodes. It is well worth spending some time here because it really offers a stunning view of the surrounding scenery. This forbidding environment is home to the diurnal elephant shrews that, if you sit still, can be seen darting around as they look for insects to eat.