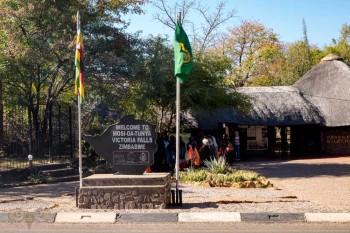 One cannot really imagine a trip to Zimbabwe without a visit to the Victoria Falls, although Victoria Falls is in many ways very different from the rest of the country. You could even say that someone who has only ever visited Victoria Falls has not yet really been in Zimbabwe. Even in the economically very difficult years for the country, tourists were still travelling to Victoria Falls, even if they were only on a day trip from Botswana or Zambia.

Therefore, it should not surprise you if you hear more different languages on the streets of Victoria Falls than in the London Underground. Likewise, in terms of the style of dress you will encounter all the different styles, from torn denim shorts and tight T-shirts to the black suits and ties of guests at the upmarket Victoria Falls Hotel on their way to dinner.

Despite the many differences, all have one thing in common: They want to see the Victoria Falls, one of the Seven Wonders of the World and a UNESCO World Heritage Site!

Dr. David Livingstone is considered the discoverer of the Victoria Falls, referred to at the time and even nowadays by the local people as "Mosi oa Tunya" or "Chinotimba". Translated it means "the smoke that thunders". This name derives from the constant, thundering sound of falling water and the huge cloud of spray from The Falls that is visible far and wide when the river is in flood.

Livingstone was probably not the first European to see The Falls. Some Portuguese explorers were verifiably in this area before his venture down the Zambezi, but Dr. Livingstone was the first European to have reported on The Falls at home and he named them after his Queen. In November 1855, he was on an expedition, the objective of which was to follow the course of the Zambezi to its mouth on the shore of the Indian Ocean. It is reported that Dr. Livingstone had heard about the waterfalls from local people on a previous trip and now followed up on these reports to find this impressive spectacle of nature. Of course, The Falls also destroyed his plans to follow the river further east for the time being. Dr. Livingstone has not been forgotten to this day. The town on the Zambian side of the Zambezi was named after him. If you book a helicopter flight over the falls, you will take part in a "Flight of Angels". This comes from a sentence attributed to Dr. Livingstone, who said of the Victoria Falls. "Scenes so lovely must have been gazed upon by angels in their flight".

The first settlement in the vicinity of Victoria Falls was a few miles above the falls on the north bank of the Zambezi River, in what is now Zambia. The place was called "Old Drift" because there was a ford very close by. But the little town was soon abandoned. The proximity to the water brought a lot of mosquitoes and a high risk of malaria. Thus the town of Livingstone was founded at a slightly higher altitude and further away from the river. Driven by the ambition to build a railway from Cape Town to Cairo, Cecil John Rhodes brought the railway to Victoria Falls from the south at the beginning of the 20th Century. The famous bridge was designed by G.S. Hobson and built in only 14 months, it was completed in 1905. To accommodate passengers in 1904, the first hotel on the south bank was built, where the Victoria Falls Hotel is situated now. What is a world-famous luxury hotel today has very humble origins, it began as a simple structure made of wood and corrugated iron.

Today’s town of Victoria Falls cannot be described as beautiful nor is it really very well kept. The economic difficulties of the past several years have left their mark: potholes in the streets, tired-looking facades and untenanted shops. But one can also see the effort everywhere that is being made to polish up the town. Traffic islands are planted with bright flowers in private initiative, some houses are freshly painted, Shona sculptures were set up in the parks and open spaces, the Victoria Falls Rest Camp has been very smartly renovated. The prospects are good that the town will gain even more popularity in the next few years the number of visitors is already significantly on the increase. Then it will certainly not take too long before Victoria Falls is once again a handsome little town.

Everywhere, you will meet people who want to sell you something: Activities, souvenirs that they have carved, jewellery, old Zimbabwe Dollar banknotes with a dizzying face value. But these people will only address you, though perhaps a little too insistently. If you don’t stop and are persistent enough in refusing them, you will be left alone. For the fact that Victoria Falls is the country’s main tourist attraction it's usually rather a quiet and placid little place. Visitors and locals stroll through the streets in a leisurely fashion.

Frequently you will encounter a few warthogs and monkeys in the parks and on the lawns. At night in the dry season elephants plunder lovingly watered gardens. Last year a photograph of a huge bull elephant made the rounds on the internet. He was wandering along the main road in front of Victoria Falls Rest Camp and was not at all bothered by all the cars and people.So let “Vic Falls” enchant you, go for a leisurely stroll on the streets along with everybody else. Visit the craft market and the many small shops, overnight and have your meals in comfort or in grand style, plunge into the fray, or spend your time in peace and quiet contemplation. Victoria Falls offers you all the opportunities to do so.