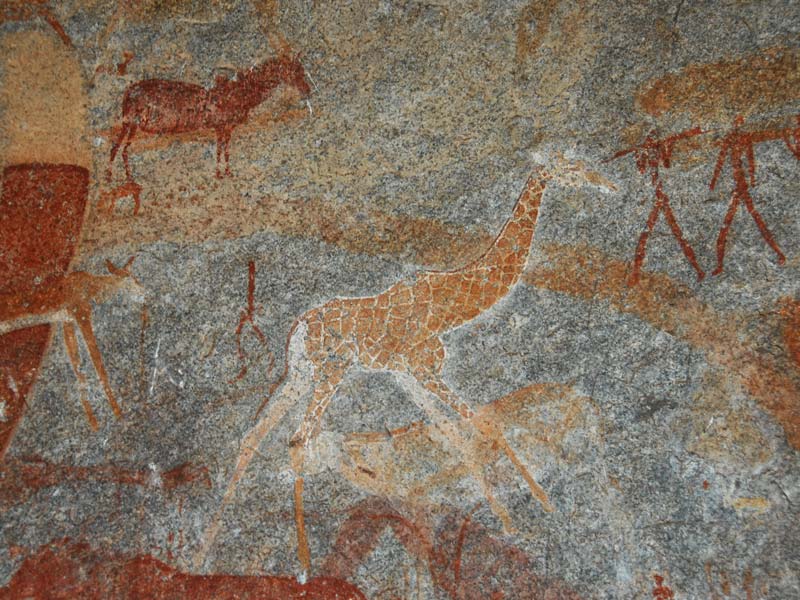 Matobo Hills National Park, one of Zimbabwe's four World Heritage Sites, is located southwest of Bulawayo, about an hour's drive from the city.

The Matobo Hills National Park was founded in 1926 by Cecil John Rhodes as Zimbabwe's first national park. He was buried here at his own request. The tomb is located on a huge rock dome with an all-round view over the breathtaking landscape. Therefore this rock is also called "Worlds View". A part of the land on which the park lies was bequeathed by Rhodes.

The "bald heads" of the Matobo Hills

The landscape of the park consists of thousands of granite hills. The rock domes, which are called "Dwala" in the local language, or "Whaleback" in English, are striking. These hills inspired the first Ndebele king, Mzilikazi, to give the landscape its name, which means "bald heads". In between the Dwalas are inselbergs, which consist of bizarrely eroded and tumbled granite boulders, covered with dense undergrowth and trees.

This mountain landscape is naturally honeycombed with caves and rock overhangs in which animals and humans have sought shelter for millennia.

Hunters and hunted in the hills of Matopos

Even today, the hills are teeming with Rock Hyrax or dassies. They look like rodents, similar to overgrown, grey guinea pigs. In fact, however, they are more closely related to elephants and manatees. These animals live in family groups in caves and crevices.

For leopards, too, the many rock overhangs and impenetrable vegetation on the inselbergs offer ideal conditions. The Matobo Hills are said to have the highest number of leopards per km² in southern Africa.

Three major rivers cross the park. All have been dammed in their course and form the Maleme, Mpopoma and Mtsheleli Dams. The reservoirs are important recreational areas for people from Bulawayo, but are also water sources and habitats for the park's animals.

In the 60s and 90s of the last century, white and black rhinos were reintroduced into Whovi Game Park. They enjoy special protection here in the IPZ (Intensive Protection Zone) and are constantly monitored by dedicated rangers in these times of rampant poaching.

One of the highlights of a visit to the Matobo Hills is tracking rhinos on foot with an experienced guide.

The San rock paintings in the caves of the Matobo Hills

Thousands of years ago, the people who passed through these mountains left their traces in the caves and rock overhangs. The nomadic hunters and gatherers of the San painted the cave walls with everyday scenes that interested and gave them food for thought. Thus you can find very lifelike pictures in warm colours from dark brown to ochre of the animals that roamed the wilderness here.

The cave walls are decorated with everything that the local fauna has to offer, from elephants to flying ants or termites and from snakes to fish. Besides you can see scenes from the life of the San: images of people hunting, at the fire, dancing, even fighting can be seen.

Among the more than 3000 known and registered rock painting sites, some stand out in particular. Nswatugi Cave is one of them with a magnificent fresco of paintings. Among them are a few giraffes that have been painted in loving detail. This cave is easily accessible and signposted on the "Circular Drive".

Much more difficult is the access to Inanke Cave, which requires a walk of about 3 hours. Nevertheless, the visit is worthwhile, because here, besides the fantastic animal pictures, some mysterious, almost human figures can be seen. It is known that the San regularly achieved a state of trance for a number of rituals. It is assumed that some of the paintings were created in these dream-like states.

If you really want to treat yourself, arrange for a day trip to the Matobo National Park with one of the renowned tour operators, e.g. African Wanderer or Black Rhino Safaris. Usually included is guided rhino tracking on foot, a guided visit to a cave with rock paintings and, if desired, a visit to the grave of Cecil John Rhodes.

The best places to stay in the Matobo Hills

If you like, you can stay overnight in Bulawayo, e.g. at the German-speaking Parrot Lodge and take a day trip to the park.

For travellers who are looking for a bit more comfort, there is Big Cave Camp on the edge of the National Park. It is undoubtedly the lodge with the most beautiful views over the landscape. It also has a beautiful campsite and is situated in the midst of its own small game reserve.

Close to the road leading from Bulawayo to Plumtree and Botswana is an insider tip: Shashani Lodge, which will open in 2019. This lodge lies on a huge rock dome with fantastic views of the surrounding mountain landscape. Rock paintings and historic grain bins can be visited on the lodge property.